Choosing A Cap Is A Whole Different Ballgame 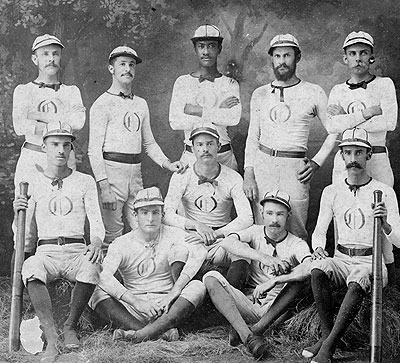 What we’re about to tell you might knock your cap right off. There’s a big rivalry going on, and it’s been right under your nose. Or above your nose, actually. It’s all about hats. What? You haven’t heard of this headgear hostility? You’d better pick a side, quick.

How deep does this feud go? We’re talking bigger than East Coast versus West Coast, the Hatfields versus the McCoys, the North versus the South, the New York Yankees versus, well, anybody. That does sound serious, you say, but there’s nothing even remotely controversial about hats. We just hope you were at least thinking about what was once considered just a ball cap when you said that. Save your Stetsons, derbies or fedoras for another place, pal. It’s the battle of the caps.

If you’re scratching your head over what a "baseball cap" or "ball cap" is, you’re already a part of this rivalry. Why are we so sports-minded right now? We’re not, not really. We’re just going to throw out some words for you to think about. Lid, trucker, dome piece, dad, hood. Maybe you didn’t recognize any of those. Even if you respond to ball cap or baseball cap, know we’re still not talking sports. Whether you’re talking slang, style or place in time, we’re talking hats. So that we’re on the same page, here’s what your hat is, and it’s the only hat worth discussing. The hat we’re talking about is the close-fitting cap with a visor that typically has six panels. Oh, and baseball players wear them. Okay, we did mention sports again. But everyone is wearing them, even if you’re not out hitting homeruns.

You’re wondering what the fuss is. Such a buildup, probably just as an excuse to talk sports. But let’s dig deeper. To try to steer clear of confusion, we’ll call it a hat, just a hat. But how do you like your hat? Which one is your favorite? And let’s not be inclusive here. You and your best friend might not call the same thing a "true" hat. Does what you consider the embodiment of a hat look like a genuine baseball hat? Does it have a curved brim or does it have to be flat? Are the sides of your hat mesh or are they solid fabric? Is it stiff and structured or soft and distressed? And the band in the back securing your hat to your head, does it have plastic snaps, elastic, buckle closure, or is there just no band at all? Maybe all your hats aren’t the same, but we bet that when you picture the ideal hat in your mind, you know it’s the real deal, and naysayers be forewarned. Oh, are you starting to have an opinion on the ideal hat? You always probably did. And while we can outfit you in your ideal, let’s examine some of the absolute faves.

Don’t even confuse a dad hat with something as uncool as mom jeans. A dad hat is a baseball cap that’s made of fabrics known for comfort and flexibility, such as cotton, canvas or twill, and it has a slightly curved brim. While so many conjure up images of a distressed and casual hat, it’s made the jump into one of the hottest fashion staples. That picture of Rihanna in the black dress, hoop earrings and casual cap? That’s dad hat turned couture. We carry the fan favorite in a more traditional look, such as The Valucap Classic Dad Cap, with that low-profile fit and pre-curved, tell-tale visor. But we also say, don’t be afraid to dress it up, too. Our favorite celebrities are.

A traditional trucker hat still gives off that cool retro feel of its 1960s origins. It has also been called a "gimme," "give me," or "feed cap" because they were the biggest promotional giveaway items from feed or farming supply companies to farmers, truck drivers and other rural workers. While historical trucker hats may have started out with five panels and a foam front, not all trucker hats today follow that exact tradition. What still stands true, though, is that most have the slightly curved bill. A trucker hat also stands up straight and stiff, making it taller than most caps. And it’s absolutely known for that signature plastic mesh, back then for breathability. While it served its intended purpose for functionality, the trucker hat lives on as being more of a cult classic. Our Yupoong Retro Snapback Trucker Hat is perfect for printing, with a bit of a more of a sophisticated take on its origins.

Okay, now we absolutely have to talk sports, but the baseball hat (or ball hat) got its beginnings from there, our favorite national pastime. In 1860, the Brooklyn Excelsiors wore the first baseball hat. By 1900, the "Brooklyn style" took off. Its first look was much more floppy and with a shorter brim, but the style we know and love today has remained relatively the same with its stiff structure, long bill and signature metal button on top. It was originally designed to keep the sun from a player’s eyes. From such a simple need, an entire culture was born. The baseball cap is both traditional and modern at the same time. And while it’s still worn from the pros to t-ballers, the baseball cap couldn’t be kept on the field.

Some say the flat-bill (or flat-brimmed) hat is what really turned the world upside down. For generations, the traditions of a baseball hat were tweaked and modified. Families once gathered for holiday meals without discord until someone showed up one Thanksgiving without even so much as a hint at a fold in their brim. Words were exchanged, food flung, tables overturned, loved ones ostracized. Do we owe the flat-bill for the rivalry we know today? No, but it makes for a dramatic entry. The truth, though, is almost as dramatic. The trend of a flat bill started within a decade, and while it was originally a mainstream look on the traditional baseball cap, it came all the way back home, to baseball, where it made its biggest debut. Flat-billed baseball hats can be seen alongside their bent-billed counterparts as Major League Baseball debates who’s correct.

THE NEXT BIG THING?

Care to add to the debate? What about pattern power? Sold on our sister site, Blankcaps.com, we’re proud to show off what we’ve already seen as the next big thing.

While you might observe some of the previously mentioned side mesh on the trucker hat, one of our newest favorite brands is making waves simply by being an on-point trendsetter. Our Richardson brand hats, for example, are making it all about their unique and original patterns.

With so many takes on caps, who’s right? Well, you are. Whatever you’re wearing, whatever makes you feel comfortable, whatever makes you feel true to tradition or even true to your team, we say you know the perfect hat. And while we carry even more trends than we’ve been able to highlight here, you might have an open mind to trying something new, too. We know that we may not be able to end the war on headwear, here we also know that there’s room on your shelf for them all.